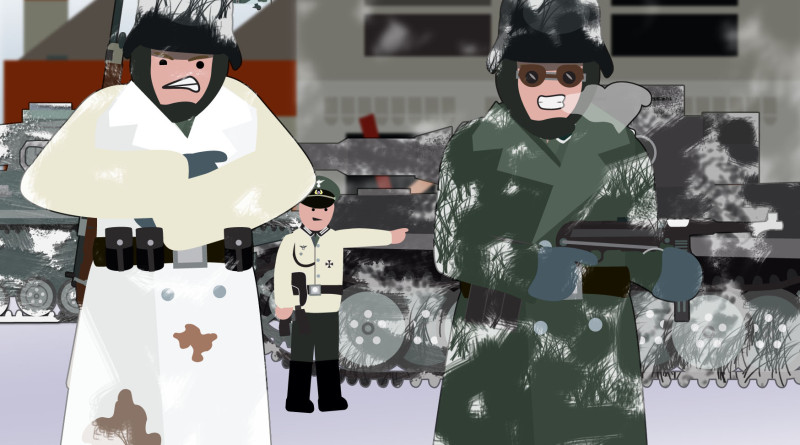 The Battle of Stalingrad was one of the most important battles of the Second World War. Ranging from July 1942 to February 1943 the battle is considered by many historians to have been the turning point in the war in Europe. The battle drained German army of its resources and after its defeat it went into full retreat in Eastern Europe. The great irony was that Hitler may not have needed to take Stalingrad. Their eastern push into the Soviet Union had been so successful. They had made great inroads into the oil fields of the Caucasus (south-west Russia) which could have fuelled the war effort. Instead Hitler turned his attention to Stalingrad. After all the city was an important centre for Soviet Union communications and transport to southern Russia. It was also a large industrial city producing large amounts of armaments for the Soviet war effort. Finally, the city was also named after the Soviet Union’s leader and Hitler’s hatred of Stalin meant he could not let it go unconquered. For the same reason, however, Stalin ordered that his city had to be saved at all costs.

By September 1942, the German army began to advance on the city. Hitler had expected the city fall quickly. After all, the Russians had already been shocked and devastated by the German Blitzkrieg during Operation Barbarossa. However, he had not taken into account the stand that the Russians would take in defence of the city named after their leader. The Russians could simply not afford to lose the battle. Their morale would be completely destroyed and the German army would get complete hold over the oil fields of the Caucasus.

Neither side could afford to lose the battle for city and thus it descended into one of the most bloody in the whole of the Second World War. Each street was fought over by hand-to hand combat and areas that had been captured by one side during the day were often re-taken in the night. More than 1,000 tons of bombs were dropped on the city, but Stalin forbade any evacuation from the city, even of children. Stalin sent Soviet reinforcements but they had to cross the Volga River and many of them drowned under the weight of their clothing and weapons. The average life-expectancy of a Soviet private soldier during the battle of Stalingrad was just 24 hours.

Whilst at least initially, the Germans took control of much of the city they couldn’t fully control it. After all, the ferocity of the fighting at Stalingrad shocked the Germans, who were used to the relative ease of their Blitzkrieg tactics. Suddenly they were faced with hand-to-hand combat, often only yards away from the enemy.

By November the Russians launched a devastating counter-offensive. Six armies of over a million men led by Marshal Zhukov surrounded the city. This left the German army completely outnumbered and surrounded. The German Army may have been able to use all of its force to break out of the trap and escape during the first stage of the Russians counter-attack but Hitler forbade them to do so. This meant the Germans had to face the Russian winter, where temperatures dropped well below zero. The German army was also low on food and ammunition. Nevertheless, Hitler demanded his soldiers fight to the last bullet but by January they had no choice but to surrender.

The failure of the German army was a full-blown disaster. A whole army unit was lost and nearly 100,000 Germans were taken prisoner. The Germans loss of such a vast amount of manpower and equipment seriously hindered the rest of their war in Eastern Europe. Meanwhile the Russian Army was galvanised by its heroic victory and began to push the Germans back in other parts of Eastern Europe.

It estimated that more than 800,000 Axis forces were killed, wounded or captured. On the Soviet side, it is believed well over a million Soviet soldiers were killed. This is not to mention the 40,000 civilians killed as well. At the end of the war Stalingrad was In 1945 Stalingrad was officially proclaimed a Hero City of the Soviet Union for its defense of the motherland.

Ben Wynes
I am currently studying for a PhD in History, a subject I am fascinated by. My main interests include the Second World War and Communism, especially in Russia and the former Yugoslavia.
Latest posts by Ben Wynes (see all)

I am currently studying for a PhD in History, a subject I am fascinated by. My main interests include the Second World War and Communism, especially in Russia and the former Yugoslavia.